What is Split Testing?

Split testing is a random process generating statistically significant results. A true split test is the only way to tell whether changes to your website are delivering a higher conversion rate, as simple before and after comparisons are not accurate.

Here’s a simple graphic that shows the basics of a split test (taken from our friends at VWO): 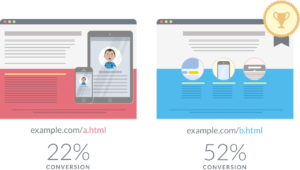 Without performing experiments on your site, you potentially miss out on revenue.

Why optimize your conversions?

Because SEO and PPC have gotten so competitive, achieving a higher conversion rate can be your competitive advantage. If you can convert double the number of customers compared to your competition, you can afford to spend more on your PPC campaigns, thus bumping them out of a competitive spot.

Another way to think about this is that you are widening your marketing funnel: 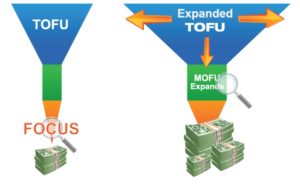 With more customers getting in the door, you don’t need to spend as much on marketing to acquire them, thus decreasing your marketing expenses.

It’s important to differentiate between a split URL test vs a “split test” that most people talk about.

In a split URL test, you are literally sending traffic to two different site variations. For example, some traffic would go to www.site.com/A and www.site.com/B.

However, in a split test, all traffic goes to www.site.com. By using testing software that employs javascript, you can show or hide elements to 50% of traffic, and not display those elements to the other 50% of traffic. This is traditionally what we refer to as a “split test.”

When You Should Split Test

Split tests are helpful in all of the following situations:

The flipside of split testing is “overtesting,” or trying to improve conversion rate too fast. Don’t do this! Split testing takes time to do properly, often months of effort. It is a long-term investment and not simply a quick win for more revenue.

If you test too many things at once, or do not give tests enough time, you won’t get the type of meaningful results that you need, forcing you to retest things that you’ve already tested.

Our team has completed literally hundreds of AB tests for clients, averaging a 28% improvement in conversion rate. Get in touch today and get a free evaluation for your website.